4 reasons small stocks could be studs this year 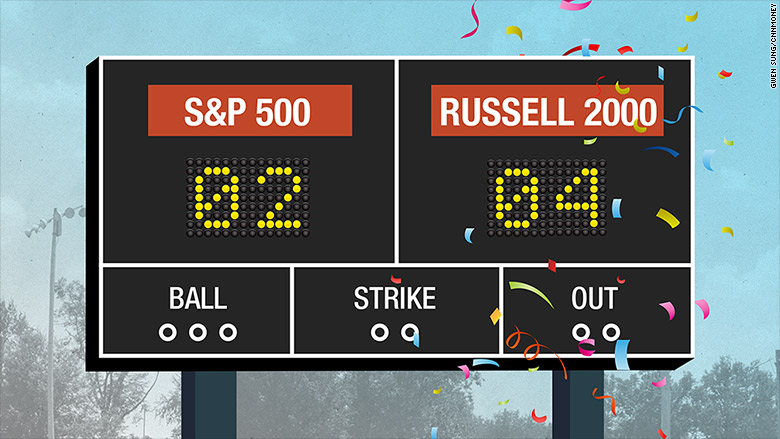 Big stocks like Apple grab everyone's attention like All-Stars showing up to spring training. But small stocks are sometimes the next rookie of the year: studs few know about right now.

Both indexes hit all-time highs on Tuesday, but analysts project that the S&P 500 will grow about 7% this year while the Russell 2000 will soar 13%, according to Bloomberg Intelligence.

It's important to remember that small stocks, which have market valuations of about $4 billion or less, tend to be quite volatile. Consider that the Russell struck out last fall, shedding 11% over a rough six week period.

But small caps have recovered since then and could be strong investments this year. Here are four reasons why:

1. Strong dollar isn't a problem: Big companies like Coca-Cola (KO) and Caterpillar (CAT) have been warning that the strong U.S. dollar, global slowdown and oil prices will hurt their businesses. It's a very different tune for small cap stocks.

Most companies in the Russell 2000 only operate in the U.S. and don't depend on oil prices.

Low oil prices are a boon for some small stocks, including gas-guzzling trucker companies Knight Transportation (KNX) and Heartland Express (HTLD). They love low oil costs: their shares are up 51% and 25% on the year, respectively. 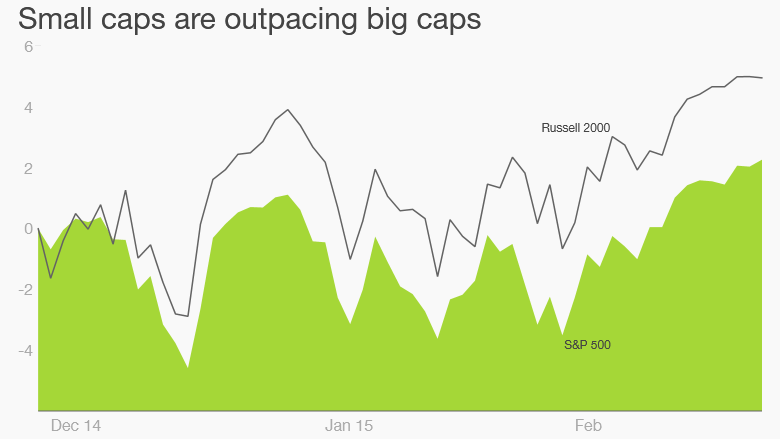 2. Investors are hungry for IPOs: Last year's IPO surge -- the highest since the Dot-com era -- showed investors' unquenched thirst for two kinds of high risk, high reward stocks: tech and healthcare. Those two sectors made up half the IPO market in 2014, and many of the companies are considered small caps.

"What really makes us excited about small caps this year...is the IPO market," says Jordan Stuart, a client portfolio manager of the Federated Kaufmann Fund. "We had a record year last year in IPOs in the U.S. and we feel that's going to continue."

3. Easy Money: Finding money isn't a problem for small caps right now. Interest rates are still very low across the market, which means it's easy for companies with lots of promise to get lots of cash up front.

This "easy credit," environment, experts say, is huge for small caps, which tend to burn through cash up front on developing their product, but, hopefully, pay it back.

When the Federal Reserve has raised interest rates in the past, it's generally been bad for small stocks because they were overvalued, says Jim Oberweis, founder of the Oberweis Report, an investing report on small caps.

"This time could be different," says Oberweis. The Fed's expected to raise rates this year, but he argues small caps aren't overvalued this time.

Takeaway: a rate hike this year might not hurt small stocks as previous ones did.

4. Niche and nimble: Smaller companies typically focus on one product or medicine. The promise is that they'll bring some game-changing innovation to tech, healthcare or cheeseburgers (re: Shake Shack).

Look at Dexcom (DXCM), a company that makes medical devices. They're developing an app for Apple's iWatch that will allow people with diabetes to measure their sugar levels. Its stock is up 37% this year.

"These are companies that are investing and innovating their own growth," says Stuart, whose fund owns Dexcom stock. "It doesn't matter if oil is at $100 or $50."