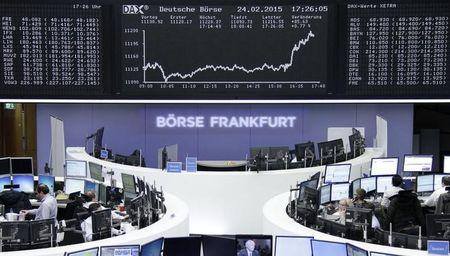 Global equities set a new record high and bond yields sank to fresh lows on Thursday as investors positioned for an extended era of cheap money ahead of the European Central Bank's looming bond-buying scheme.

There were also signs the euro zone economy may be turning a corner as consumer morale picked up in the bloc's largest economies and bank lending fell at a slower place.

Central banks' battle to keep cash flowing into the financial system to avert a deflationary spiral has driven core European government bond yields into or close to negative territory, with German seven-year bond yields the latest to go below zero for the first time on Thursday.

That has pushed investors ever deeper into higher-yielding assets like equities and the MSCI All-Country World equity index <.MIWD00000PUS> climbed to a new record high of 434.40 points.

Bets that a U.S. rate hike might come later than expected, triggered by comments by Fed chair Janet Yellen this week, also bolstered views that the environment of rock-bottom rates would hold for the near future.

"We think central bank easing efforts will continue to provide liquidity to the markets and expect that could help drive flows into equities globally as investors search for yield," said Mark Mobius, emerging markets fund manager at Franklin Templeton.

A new record low of -0.003 percent for German seven-year sovereign bonds came after Germany sold its first five-year debt with negative yields on Wednesday and after Irish borrowing rates fell below 1 percent for the first time.

There was also good news from Germany on consumer morale, which rose to its highest level in more than 13 years heading into March as low oil prices fed through to households.

On equity markets, Asian shares slipped back from a five-month high, but in Europe corporate updates from blue chips including Anheuser-Busch Inbev , Allianz and Deutsche Telekom saw the pan-European FTSEurofirst 300 <.FTEU3> rise 0.3 percent.

About two thirds of the way into Europe's earnings season, 55 percent of companies have met or beaten profit forecasts. Overall, fourth-quarter earnings are expected to grow by 19.5 percent, according to Thomson Reuters I/B/E/S, which would be Europe's best season in 3-1/2 years.

The financial sector was also in focus after Asia-focused bank Standard Chartered said former JPMorgan investment bank boss Bill Winters will take over as chief executive in June. The bank's shares were up 2 percent.

Shares of Royal Bank of Scotland fell 4 percent, meanwhile, after the lender reported a 2014 loss of 3.5 billion pounds.

Emerging markets <.MSCIEF> got support from Yellen's comments and a steadier U.S. dollar, with the Russian rouble strengthening for the third straight day.

Greek equities <.ATG> were down more than 2 percent, with the country's fate in focus after it said on Wednesday it would struggle to make debt repayments to the International Monetary Fund and the European Central Bank this year.

In commodity markets, Brent crude fell towards $61 per barrel after a rally in the previous session, as bulging U.S. crude stockpiles offset indications of a demand recovery.

London copper prices neared a six-week peak and gold gained for the second day on views of a U.S. rate-hike delay.