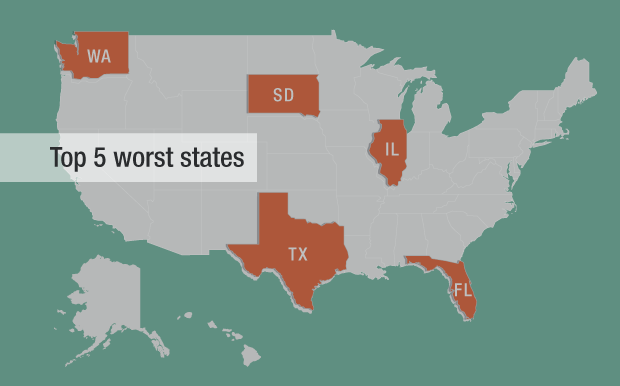 According to a new report of the Institute on Taxation and Economic Policy, the people who earn the least amount of money.pay about 17% taxes. Meanwhile, the most successful citizens cough up just 2.4%.

Front the list you’ve given, you won’t believe which states have a better employment record of the poor and are actually gaining population while the others are losing population. Yep, those states that you list as having unfair taxes have a better job record and lower cost of living for the poor than your so called fair tax states like California. So go back to the drawing board on trying to mislead people.

The fairfax is the only way to go.Your taxed on consumption only.No income tax.It would just about elimate the IRS.The democrats want you to rely on government.So because of that it'll never happen.

% don’t mean anything when the corresponding dollar amounts being paid in taxes by the ‘rich’ dwarf the pittances being paid by the poor.