Europe will print money, it's just a matter of time 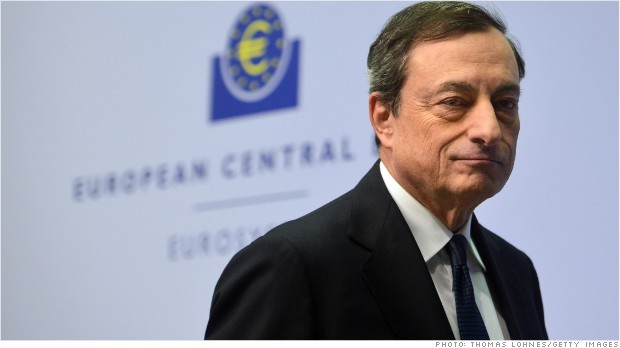 Another crucial moment for Mario Draghi. The President of the European Central Bank, whose promise in 2012 to save the Euro and to help Europe get out of debt, currently forced to perform another rescue mission.

With prices falling for the first time since the great recession, now investors are betting that the ECB will print money to buy government bonds on a large scale.

Austerity means less money in the hands of the many, via unemployment, underemployment, slashing public benefits, etc., which means less demand, which means deflation. It isn’t too difficult to see. Yet big business, big money, and their plutocratic politicians, who should understand these very fundamental aspects of (the genocidal) economic system, continue to insist on grabbing what little money the many have and stashing it into their own pockets until nobody has any wealth but them. Incidentally, the inevitable consequences are than the whole system fails, which means that, relatively speaking, big business, big money and their plutocratic politicians, would literally lose astronomically more than everybody else … at first … then civilization fails and we all lose; when that happens, I just hope people remember that it was those three entities who made it happen.

What is wrong with Europe?  Why are they teetering on the verge of recession?  The United States pulled itself out, so why can't Europe?  Are they a continent of incompetents?  European sanctions against Russia never should have been levied, considering the region's tenuous economic status.  Those sanctions should be abrogated immediately in order to bolster the Eurozone's recovery.  And what's the big deal about Greece leaving the Eurozone?  Greece has been a millstone around the rest of Europe's neck for decades.  The Greeks reached their pinnacle both intellectually and economically in ancient times and have been in decline ever since.  Also ECB bond buying is long overdue there.  So, Europe, let's get going!

With deflation, now Europe has one more legitimate reason to print more money, just like we did in the US at a much earlier stage of the recession. Europe should have been done earlier but Germany is acting very Prussian in its economic interpretation of monetary policies.