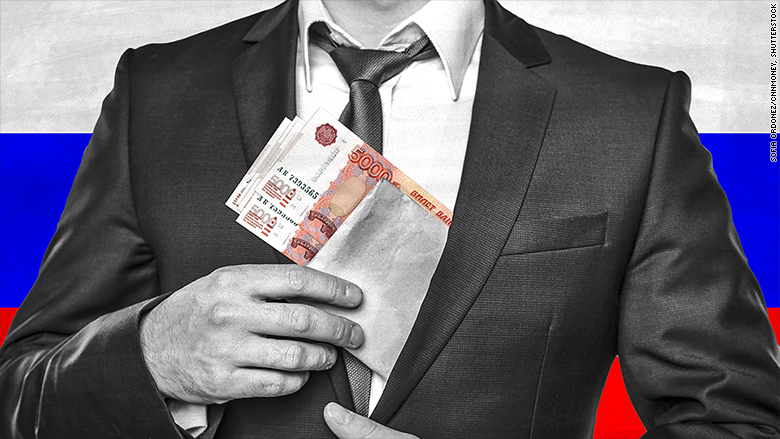 It costs a lot more to bribe a Russian these days.

Soaring prices and the weak ruble are creating corruption inflation: the cost of an average bribe shot up 37% in 2014.

That's up more than 10 times in just five years. According to the Russian government, the average bung was just 23,000 rubles in 2009.

Russians trying to pay off officials have the struggling economy to blame for the rising costs.

The double whammy of cheap oil and Western sanctions is hurting the country's finances.

As the ruble has collapsed -- losing 40% against the dollar in six months -- the cost of bribing officials has shot up because they mostly insist on being paid in a hard currency, according to Yakunin.

Corruption is widespread in Russia. The country ranked 136 of 175 countries in Transparency International's Corruption index, on a par with Nigeria, Lebanon, Kyrgyzstan, Iran and Cameroon. One in four Russians admits to paying a bribe, according to the group.

Bribes are most often exchanged over government contracts, construction, and land distribution.

The Russian government is trying to do something about the grim statistics.

It has embarked on an anti-corruption drive. New laws require companies to disclose more detailed information about deals, and give authorities greater powers to crack down on offenders.