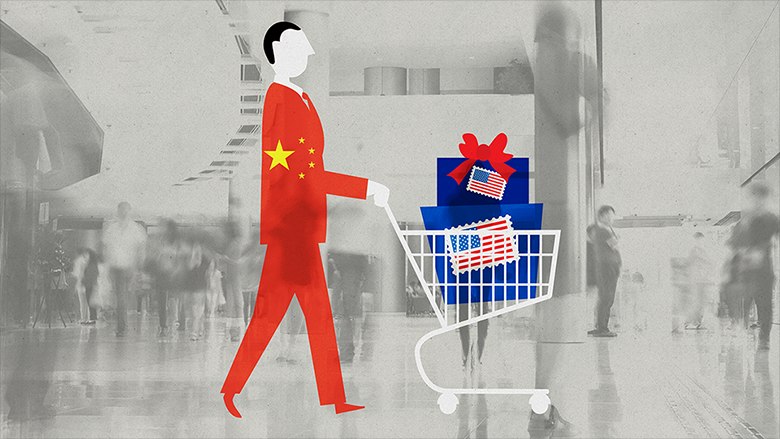 New waves of Chinese tourists will soon hit U.S. shores and big retailers are poised to cash in.

These high-spending travelers make most of their trips in Asia, but the U.S. is gaining popularity fast.

HSBC expects Chinese tourists will drive sales of luxury goods in the coming years, and describes America as their "new Eldorado," or golden city.

Visitor numbers are climbing after the U.S. relaxed visa requirements for China last year, making permits valid for a decade, rather than one year. About two million Chinese tourists visit the U.S. each year, and the U.S. government forecasts annual growth of about 20%.

The economic potential is big: Chinese tourists spend more than any other foreigners at an average of $7,200 per visit.

The U.S. is particularly appealing for a number of reasons, including prestige. Wolfgang Georg Arlt, director of the China Outbound Tourism Research Institute, said wealthy Chinese view a trip to America as a social necessity.

"It is part of the confirmation of their status and lifestyle to have visited at least San Francisco, Las Vegas, the Grand Canyon and New York," he said.

There's also more choice of products for Chinese shoppers. And they avoid the risk of counterfeit goods prevalent in China.

But the main lure is price.

Renee Hartmann, of China Luxury Advisors, said luxury merchandise in the U.S. tends to be around 35% cheaper than in China. The company advises Bergdorf Goodman, as well as brands like Prada (PRDSY) and Tom Ford on how to reach the Chinese consumer.

Still, getting a Chinese tourist in the door won't guarantee sales. Experts say retailers need to pay attention to their product lines and customer service. For clothing, that means making sure it reflects Asian sizes and tastes.

Stores may also need to hire Chinese-speaking staff and train workers to respect the high expectations Chinese shoppers have in terms of welcome, service and interaction, said Nathalie Remy, a partner at McKinsey.

"They like to take their time," Remy said. "Shopping is entertainment. It's not so much about the efficiency of quick checkout, they expect to be entertained."

Right now only a tiny fraction of China's population -- around 4% -- has a passport. As the middle class expands, so too will the number -- and type -- of tourist.

Once confined to group tours, Chinese tourists are getting the taste for independent travel. And as the profile of the Chinese tourist changes, retailers risk losing out if they adopt a one-size fits all approach.

"We're seeing lots of different types of travelers," said China Luxury Advisor's Hartmann. Retailers need to do more direct consumer marketing, rather than just working with tour operators. "It's hard to take on a strategy and apply that to every Chinese tourist," she said.