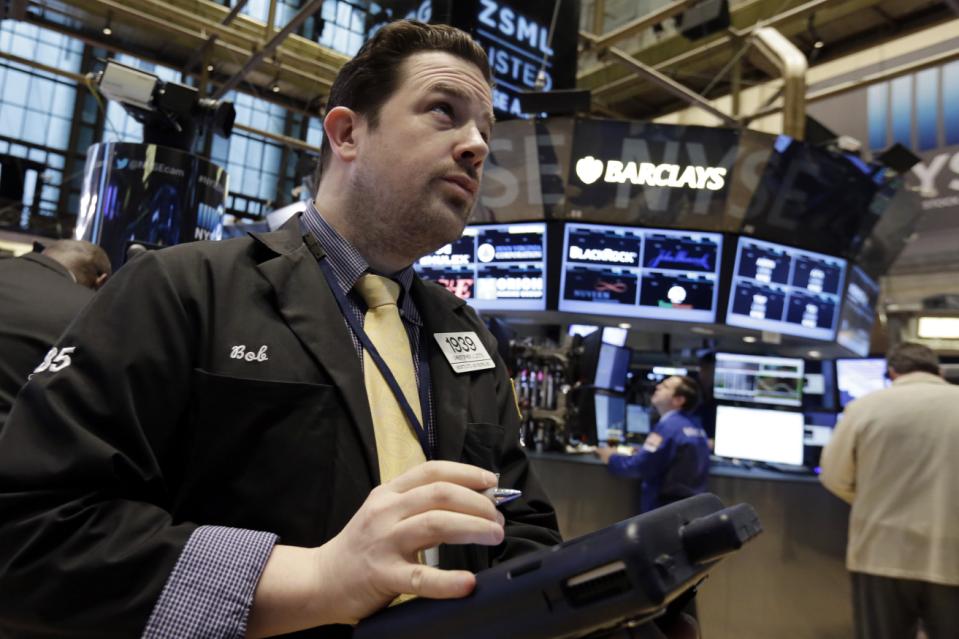 ENERGY: Benchmark U.S. crude oil fell $2.82 to close at $48.17 a barrel on the New York Mercantile Exchange. It rose $1.71 on Wednesday to $50.99 after the U.S. Energy Department reported diesel and gasoline inventories fell more than expected, indicating a pickup in demand.

NO RELIEF: Sears Holdings fell 5.9 percent after the company reported its fourth straight year of falling profit and revenue. The stock slid $2.25 to $35.65.

IN THE CLOUD: Salesforce.com gained 14.4 percent after the cloud software company reported a boost in quarterly revenue. The stock climbed $8.71 to $69.12.

THE ECONOMY: The Commerce Department reported that orders for long-lasting manufactured goods rose 2.8 percent in January, the biggest increase since July. Meanwhile, the Labor Department said prices paid by consumers, excluding food and energy, rose 0.2 percent last month. Over the past year, those "core" prices have risen just 1.6 percent, below the 2 percent the Federal Reserve considers optimal for a healthy economy.

THE QUOTE: Investors were mostly focused on the consumer prices report, a measure of inflation. That's because rising inflation makes it more likely that the Fed will move sooner to raise its key interest rate.

"It's definitely a mixed report," said Randy Frederick, a managing director of trading and derivatives with the Schwab Center for Financial Research. "The market is in this zone where it doesn't know whether to cheer bad news because that means rates will stay low or good news because it means the economy is getting better."

UNEMPLOYMENT CLAIMS: Weekly applications for unemployment benefits rose last week to a seasonally adjusted 313,000, the most in six weeks. That total is still consistent with steady hiring. Applications are a proxy for layoffs.